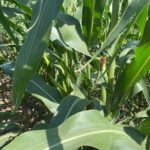 About 54% of both corn and soybeans are in good to excellent condition.   Soybean blooming is nearly complete with pod setting behind average.  Corn dough and dent stages are also behind the five-year average.

There were five and a half days suitable for fieldwork last week in Indiana.  Many farmers were cutting hay, and about 50% of third-crop alfalfa hay is cut, while 81% of second-crop other hay and 22% third-crop other hay is harvested.