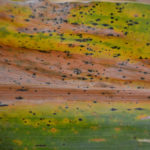 A Midwest agronomist says there has been less detection of corn tar spot so far this season.

“So far, we are getting just enough dry weather in between rains to hold it back, on a general scale. The pockets where farmers are receiving more rain or more frequent rain, they need to be on higher alert for establishment of tar spot.”

But he says since the crop is later maturing this year, the fact that there is not significant disease establishment yet, doesn’t mean farmers are in the clear.