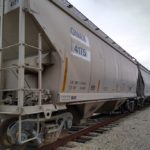 The leader of the Minnesota Crop Production Retailers says if America’s Class I railroads go on strike, the impact on agriculture would be large.

Murray tells Brownfield his state has a robust network of railroads including four Class One railroads.