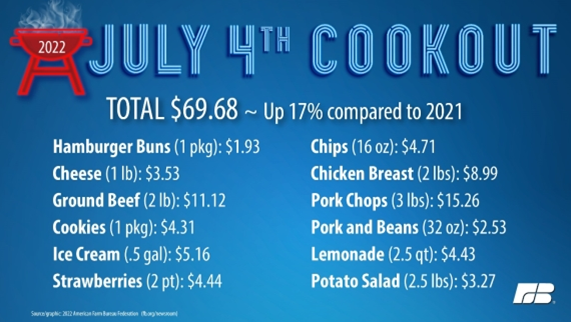 American Farm Bureau economist Veronica Nigh says the average cost for 10 people is up 17% to $69.68.  She tells Brownfield proteins saw the biggest jump in prices.  “Two pounds of ground beef for burgers was up 36%, two pounds of boneless skinless chicken breast was up 33%, and three pounds of center-cut pork chops were up 31%,” she says.

But, Nigh says not everything was more expensive this year.  “Two pints of strawberries were down 16% compared to last year,” she says.  “That might be a little surprising, but I think it’s important to remember that last year prices were pretty high because of the drought conditions were impacting large swaths of strawberry production regions.”

Data for this year’s survey was collected by 176 volunteer shoppers across the country and in Puerto Rico, including Farm Bureau members and others.

Indiana Farm Bureau 2nd vice president Isabella Chism says the average costs for 10 people in Indiana was $64.32.  “The entire nation was up overall,” she says.  “But we were 8% under the national average.  We can take some of those lower prices for us here in Indiana.”

She says with the farmer’s share of the retail dollar at just 8%, prices paid by consumers don’t adequately reflect prices received by farmers.  “When it leaves the farm gate, it incurs other costs,” she says.  “Transportation, processing, labeling, packaging, before it gets to the grocery store shelf before it gets to our plates at home.”

And while most items on the shopping list were higher this year – strawberries and lemonade were not.