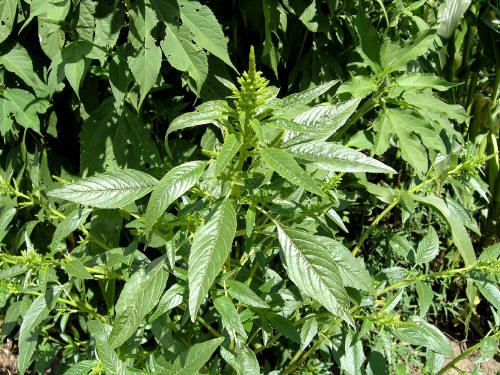 Waterhemp is becoming a tougher weed to deal with in the Midwest.

“We’re spraying Liberty right now; I use the 36 ounce rate,” he said. “It looked like we had killed everything and I just went back and looked at some fields yesterday and it looks like I’m going to have to respray at least around the outside of them. Maybe I’ll have to spray the whole thing.”

Kindred said waterhemp control is likely why dicamba is used so much by growers on Liberty soybeans. But he says that might not be an available tool in the future because of regulation.

“That’s the biggest concern, is that it gets resistant to all the herbicides that are going to be out there and then what do we do,” Kindred said.

He said cover crops could be a solution, but…

“I had cereal rye that was, probably, three and a half foot tall this year when we planted into it,” he said. “And we just sprayed it a couple days ago and it had waterhemp in it.”

Kindred said he might need to bump up and spray 42 ounces of Liberty to kill waterhemp on the first pass. Brownfield interviewed Kindred as part of the Illinois Soybean Association’s Soy Around the State tour Wednesday.