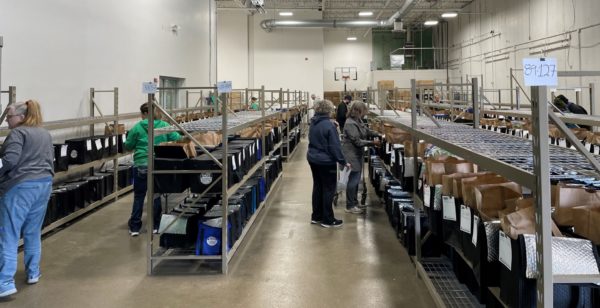 Market Wagon, an online farmers market, is celebrating $10 million in sales for farmers in central Indiana.

Nick Carter, the CEO and co-founder of Market Wagon, says it’s an important milestone for the local food community.

“This was a great celebration today of a big milestone. We’re celebrating that just here in central Indiana we’ve reached $10 million in cumulative sales. The vast majority of that revenue goes straight to the farmers and food producers here,” he says. “So, we were able to hear stories from food producers and farmers that are impacted and on our platform. We were also honored to be joined by Bruce Kettler, Indiana State Department of Agriculture Director, and Vop Osili, president of the Indianapolis City-County Council.”

He tells Brownfield Market Wagon, headquartered in Indianapolis, has grown significantly in the past six years.

“We started just here in central Indiana with a small little startup. We had 12 orders in our first week, the customers had to come to us to pick it up, and we had seven farmers on the platform,” he says. “Today in this warehouse where we’re standing, over 200 farmers and food producers are going to come through here and we’re going to ship out orders to over 500 doorsteps.”

Terri Priest, owner and operator of Priest Family Farms in Henry County, Indiana, has been involved with Market Wagon for four years.

Carter says he’s very proud of the impact it has had on local food producers.

“It’s really overwhelming to think about the impact that we’ve been able to have for local food producers, not only just the dollars over this time but also the opportunity we had to serve these farmers through one of the most challenging two years in farming and food production,” he says. “Overnight it seemed farmers markets were shut down, restaurants and chefs buying their foods closed, local schools and universities that have been buying from local farmers closed and here we stood with the ability for them to join our platform, rapidly scale up, and bring the food directly to the consumer’s doorstep and it’s been an amazing opportunity to serve.”

In March 2020, Market Wagon was available in six cities, four in Indiana and two in Ohio. Since then, the business has expanded to 33 cities in 20 states including Illinois, Indiana, Iowa, Kansas, Michigan, Minnesota, Missouri, Ohio, Tennessee, Wisconsin, and more.