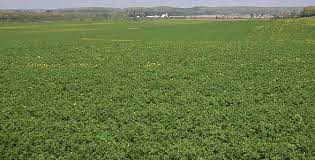 An agronomist says farmers should inspect their alfalfa stands while they are waiting for good planting weather.

Aricka Roberson with Pioneer tells Brownfield the mild winter left most alfalfa fields in good shape, but it’s still a good idea to get out and look for signs of slow green-up, asymmetrical growth, uneven growth, and she says dig up a few roots. “We’re going to want to see a firm and white tissue with little evidence of root rot. For winter injured, it’s going to look a little bit gray, water-soaked appearance and/or brown discoloration, and a good rule of thumb is if over 50% of the root is damaged, the plant will likely not survive the growing season.”

Roberson says ideally, there will be at least 55 plants per square foot, but the decision between leaving the stand and replanting the field depends on the farmer’s operation and goals. “Some need as much forage as they possibly can get, and if they stretch those stands, and if you can get in that 40 to 55 plant range, you’re still going to have some limited yield potential but it’s not maybe enough to warrant ripping that stand up completely.”

Roberson says several of her clients with 40-55 alfalfa plants per square foot are going to stay with the crop one more year.