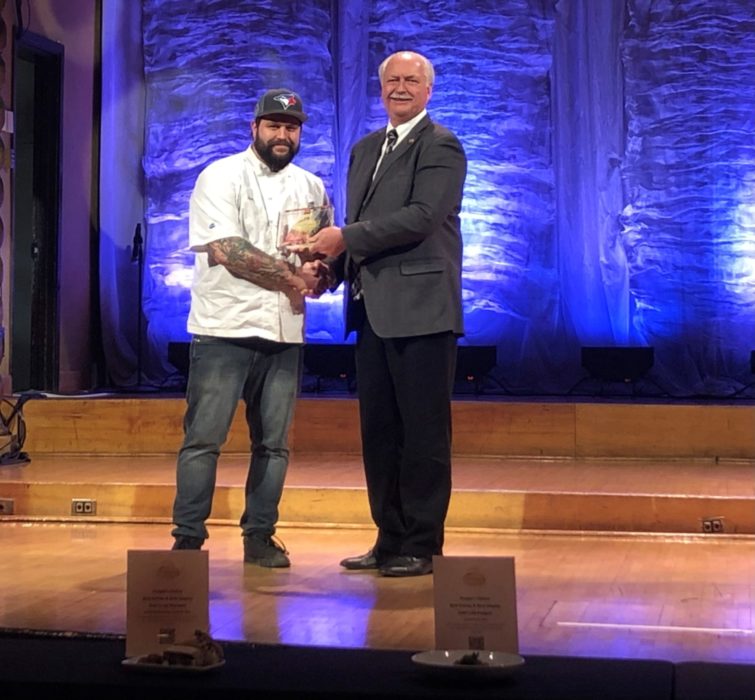 Chef Alan Sternberg from Iozzo’s Garden of Italy in Indianapolis took home the top award at the 2022 Taste of Elegance by the Indiana Pork Producers Association.

“It feels good,” he says. “I’ve been doing this event for a lot of years at this point, and this is probably going to be my last one, but I wanted to do as many events as possible coming out of the pandemic. When Indiana Pork’s Jeanette Merritt asked me, I said of course.”

He tells Brownfield about his two pork dishes.

“I did two different kinds of dishes. My tasting dish for the judges was a pork wellington with a pork collar pavé and a couple of other pork garnishes and then for our tasting for the guests we did a roasted pork and pepper ragù with fresh la mache pasta and a hazelnut pork rind dukkah,” he says.

Sternberg won the Chef Par Excellence Award at the 2019 Taste of Elegance.

“It’s important we work with our chefs so that they feature pork on their menus,” she says. “This is a chance to work with some of the best chefs in Indianapolis. They get to come here and be creative. They get to maybe do something different than they do in their restaurants and really showcase some of their cooking skills and some of the different ways they enjoy making pork. The (Taste of Elegance) event really does showcase that.”

She says it was great to be back in person after a pandemic-related postponement last year.

“We’re excited to welcome back almost 400 people to the Indiana Roof Ballroom,” she says. “It’s a combination of a cooking competition with some really fantastic chefs around Indianapolis, a night for all of agriculture to gather and visit, and a chance to recognize some really deserving people in our industry with some awards.”

The other award winners include: