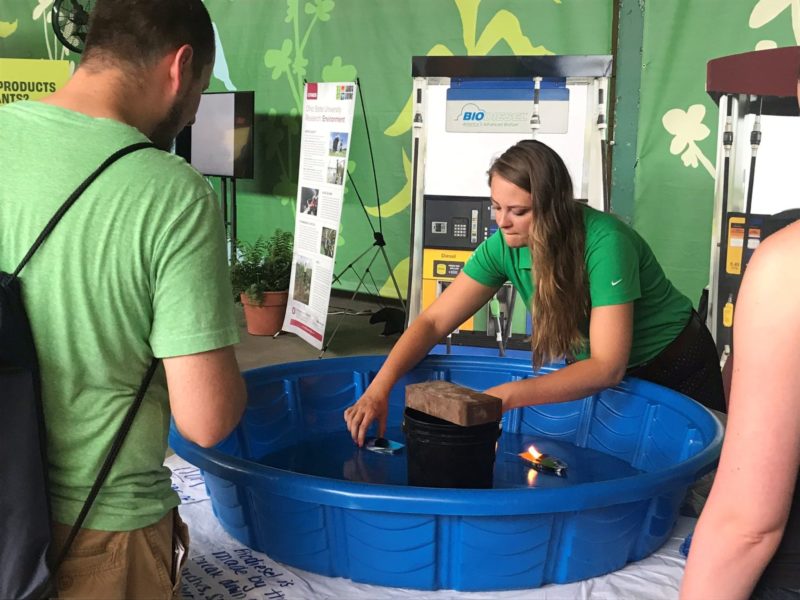 The groups are sharing recommendations to be considered as the Ohio Expo 2050 Task Force develops its long-term vision for the Ohio Expo Center, the home of the state fair.

Ty Higgins is the senior director of communications and media relations with Ohio Farm Bureau.

“Since the economic impact of our agirulcutre industry is of upmost importance for the economy of the state and for the importance of the Ohio State Fair as well, we wanted to make sure we put our recommendations on the table as well to really show this task force what needs to be done in the short-term with some of the things we recommend and also something in the long-term that goes with their vision plan which goes well beyond the next couple of years and well into the future of the Ohio State Fair,” he says.

The recommendations were sent to Ohio Governor Mike DeWine, the Ohio Expo and State Fair Commission, the State of Ohio, other public sector leaders, and the Ohio Expo 2050 Task Force.

Higgins says one of the recommendations is preserving the presence of the Ohio State Fair in Columbus.

“It’s centralized, and we’ve found in studies that fairs that are set in more urban areas just have better attendance and do better in the long run, and so we want to keep it in Columbus. It seems like over the past couple of years there’s been talk about taking away some parking and doing other things with some of the property of the Expo Center. We really want to keep the footprint the way it is now,” he says. “We don’t want any more of the fairgrounds to shrink more than they already have. We think that what we have is certainly workable, viable, and something that needs investment. We really want to see investment in what we have as a footprint now for the Expo Center. Those are our topline recommendations: keep it in Columbus, let’s invest in what we have, and let’s keep the footprint we have now.”

Higgins tells Brownfield they’re calling on investments or upgrades to several buildings on the fairgrounds.

“The Ohio Building and Taste of Ohio Café has really outlived its usefulness. That’s where all the Ohio foods are showcased. It is air-conditioned so it’s a nice building where people go to break from the heat every once in awhile, but it’s always overcrowded and the flow of traffic doesn’t give the consumer the optimal experience. So, we’re looking to do something different as far as that Ohio Building is concerned,” he says. “The Donahey Agriculture and Horticulture Building is where Ohio Farm Bureau and a lot of commodity groups set up shop. It’s dilapidated and there are a lot of aspects of that building that need a second look to ensure that we’re going to be able to show consumers what agriculture is all about in a safe and fit environment. Cooper Arena and the Dairy Products Building is woefully damaged. We need to take a look at both of those buildings.”

Other recommendations include: Leveraging and preserving use of the viaduct, a feature of the fairgrounds that needs repair and maintenance as it is used during many events to house cattle when there is not enough barn space; redesigned parking throughout the fairgrounds and new parking garages; conducting an evaluation of the safety and security at the Expo Center and State Fair; and building a new multi-use agriculture facility to provide flexibility and needed space for multiple events.

The groups also recommend that the Expo Center and State Fair continue to “honor and celebrate its agrarian heritage and its strong tradition of the development of young people through 4-H and FFA, and other youth activities.”

“It’s heritage and tradition. I was talking to my son about this, and he said he loves gong to the fair, walking through the barns, and getting a milkshake,” he says. “That’s what people remember when they go to the fair and we want to make sure that we keep that agriculture mark on the fair so when people attend it, they recognize it, feel comfortable, and are able to learn more about agriculture.”

The groups are asking the Ohio General Assembly to consider a multiyear funding measure in the state budget to help improve facilities, grounds, and infrastructure.

“We’re hopeful that it happens. We think the Governor, Ohio Expo Commission, and lawmakers in Columbus and the General Assembly will see the investment potential of the fairgrounds,” he says. “It is still a wonderful place to hold the Ohio State Fair. There is so much to do and see but there just needs to be that initial investment to really enhance all the grounds to make it a better experience for everyone involved.”

Higgins says the ag groups are ready and willing to work with state leadership to advance the process.