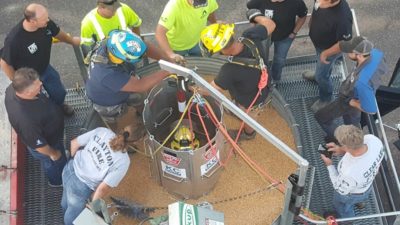 This is Grain Bin Safety Week and a leading insurance company is again taking nominations for fire department rescue tubes.

This is the 9th year Nationwide has sponsored Grain Bin Safety Week to bring awareness to the risks of entering grain bins and to prevent the tragedy of grain bin deaths. Jason Berkland, vice president of risk management for Nationwide Agribusiness, says if a farmer has to go into a bin they should lock out and tag out every piece of equipment which reduces risk but doesn’t fully remove risk.

“We also want to make sure you have lifelines on and you have a spotter at the door. If there is trouble, they can call for help and/or try and use those lifelines to get the individual out that’s in there.”

Berkland tells Brownfield Ag News there have been more than 50 deaths in grain bins over the past five years, a fairly static number.

“Purdue University keeps a website that tracks a lot of the entrapments and fatalities unfortunately associated with some of those. There are far too many and they are not always all reported either.”

Nationwide is again taking nominations of fire departments to be given grain bin rescue tubes. In all, they’ve awarded 270 tubes to fire departments in 31 states… saving a total of FIVE lives. Brownfield asked him if that is a good feeling. He replied, “It does, it feels real good.”