Rod Donavon, a meteorologist at the National Weather Service in Johnston, says that single storm spun off more than five-dozen twisters, a startling number, especially in one day. “We have verified 63 tornadoes across Iowa for the December 15th event, which is actually a daily record of tornadoes for Iowa,” Donavon says. “We’ve been doing a lot of work, checking out anywhere anybody’s had damage. We even used high-resolution satellite data to help track down all of these tornadoes.” 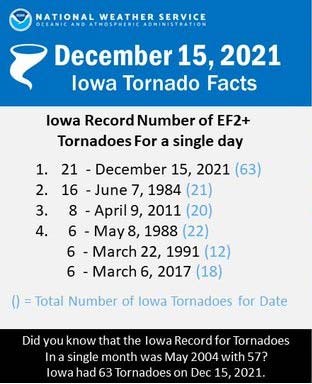 One person in eastern Iowa was killed in the December 15th storms, which caused extensive damage in multiple Iowa counties. Donavon says there’s an unusual coincidence with the two previous dates for single-day tornado records in Iowa.

The December 15th storm set yet another record for the highest number of E-F-2 tornadoes in a single day — at 21. The storm was the second derecho to hit Iowa in recent years. The first tore across the state on August 10th of 2020.