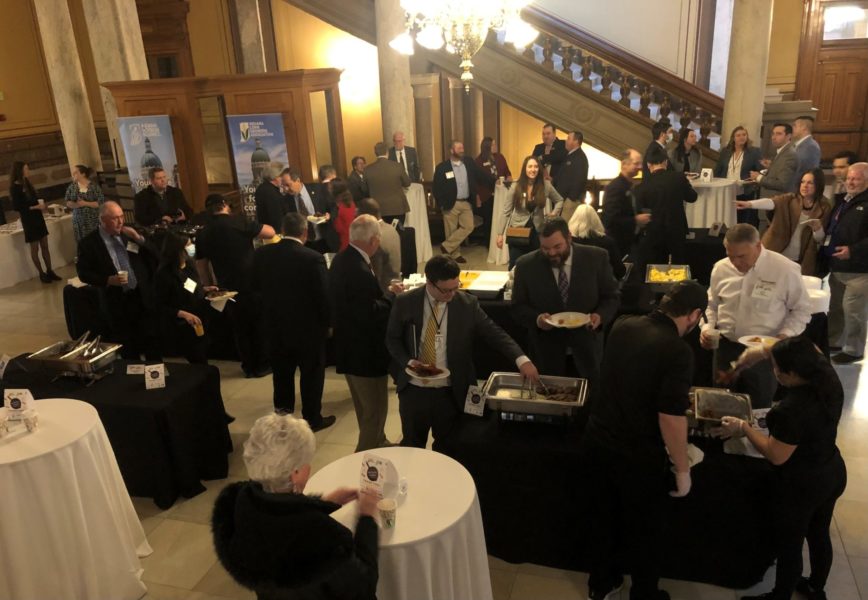 Indiana corn and soybean growers spoke with lawmakers today about agricultural policies in this legislative session of the General Assembly.

The Bacon Bar and Brunch is an annual legislative breakfast hosted by Indiana Corn Growers Association and Indiana Soybean Alliance.

Indiana Soybean Alliance Chairman Jim Douglas, a farmer from Shelby County, tells Brownfield about some of the bills of interest.

Senate Bill 85 would establish a drainage task force to review the responsibilities of landowners and state and local authorities under current laws relating to the drainage of land, make determinations concerning drainage and regulatory matters, and determine whether the balance between state authority and local authority over drainage of agricultural land favors state authority more in Indiana than in neighboring states. The taskforce would consist of six members of the Senate, six members of the House of Representatives, and seven other individuals.

Senate Bill 129, the seed test bill, would require the state seed commissioner to charge fees for testing seed for purity and germination that are equivalent with fees that are standard in the seed testing industry.  It would also allow the state chemist to establish fees that are necessary for the administration of certain laws concerning the sale and transfer of plant cultures, including costs of inspections, registration of products, and product analysis.

Another issue top of mind for farmers is a carbon sequestration, according to Dubois County farmer J.R. Roesner, an Indiana Corn Marketing Council board member.

“There are some bills out there that are looking into injecting the C02 back into the ground. Our main concern with some of these is protecting landowner rights and making sure that everyone is treated fairly,” he says. “Carbon sequestration is very important to our industry, especially ethanol, so that we are competitive on the carbon intensity scores with other fuels and other modes of transportation. This is something we need to stay up-to-date with and make sure we’re protecting our rights while we’re providing opportunities for farmers.”

“It’s really good to stay in touch for me as agriculture chairman. I have a farm, my son-in-law currently farms it, but the truth is in (the statehouse) there are not a lot of us that have true agricultural interests,” she says. “So, it’s good for the agirulcutre organization to come in and have a chance to talk to all legislators even those that are more urban. I was pleased to see so many in attendance today—farmers, staff, and legislators.”

“That committee meeting point is the only place where the general public can come in and testify and be involved directly with the success or failure of a particular bill,” he says. “So, I encourage that all the time.”

Clinton County farmer Mike Beard, a board member for the Indiana Corn Growers Association and Indiana Corn Marketing Council, says legislation passed at the statehouse impacts farmers across the state.

“Our farms are our profit centers. They’re how we send our kids to college and they’re how we make a retirement income, so we have to continue to be sustainable in an economic sense,” he says. “Some of the legislation that’s passed impacts us greatly.”

“It’s good to bring our farm issues to them because they don’t always know what is happening on our farms,” he says. “So, we bring issues to legislators, so we do have a voice to make changes and clarifications to improve our operations and everyday lives.”