Biden administration plan to address competition in the markets 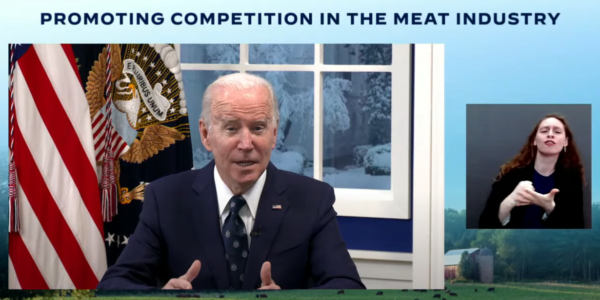 The Biden administration says the lack of competition in the meat and poultry sectors is hurting consumers, producers, and the economy.

President Biden says the current market system is distorted. “I’ve said it before and I’ll say it again, capitalism without competition isn’t capitalism, its exploitation,” he says.   The Biden administration released their Action Plan for a Fairer, More Competitive, and More Resilient Meat and Poultry Supply Chain on Monday.

He says processors – or the middlemen – currently control too much of the supply chain and producers have paid the price.  “Fifty years ago, ranchers got over $0.60 for every dollar a family spent on beef, today they got about $0.39,” Biden says.  “Fifty years ago hog farmers, got 40 to 50 cents for each dollar spent.  Today it’s about $0.19.”

The administration has pledged $1 billion in American Rescue Plan funds toward expansion of processing capacity.

Vilsack says expanding processing capacity only benefits the industry if there is also a trained workforce. $100-million of this resource is going to be used to support them to create a pipeline of well-trained and experienced workers,” he says.  “So that we can expand this workforce in Rural America. These will be good-paying jobs that will support families, and also support for farm families.”

Ethan Lane is vice president of government relations with the National Cattlemen’s Beef Association. “You know of what we did get to see (before we were removed from the meeting) did have some high points in it as far as Secretary Vilsack commenting that they’re going to dramatically increase the amount of money available for processing capacity grants,” he says.  “They’re going to kind of tier that, it sounds like, through the course of this year and really focus it in on specific areas of need for small independent regional processors around the country.” Lane says the plan also addresses other issues, like Product of the USA labeling, which is something NCBA has previously requested to be addressed.