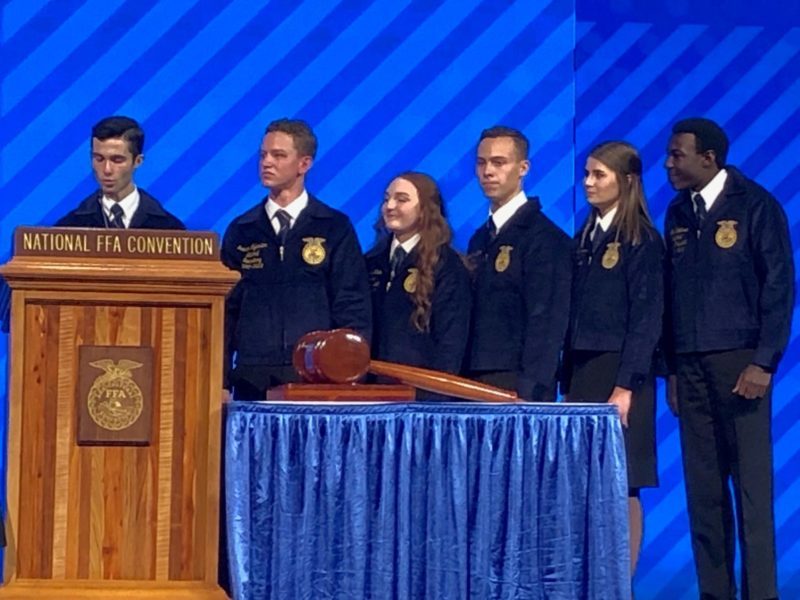 The 2021-2022 National FFA Officer team was elected at the close of the 94th National FFA Convention and Expo in Indianapolis.

The six students selected to lead the National FFA Organization say they’re ready to meet with students and begin their year of service.

Cole Baerlocher, an agricultural education major from Washington, will lead the organization as president.

“The six of us are in this position where we are leaders and servants for over 730,000 members and that has to be humbling because you have the power and ability to change so many people’s lives by making effort and time,” he says. “…This is an opportunity very few get and taking that seriously and making every effort to do my best and make those impacts is going to be a main focus and goal for me this upcoming year.”

She says she’s looking forward to “being able to not only dive into those students who have deep roots in agriculture but then also those non-traditional students who are just entering the agricultural education classroom and finding their importance in this organization.”

“I’m excited to spread the good word of American agriculture— that is my biggest passion. I grew up on my family’s farm so my family instilled that in me, but FFA has developed that passion in me,” she says. “I’m excited to share this message with our members, supporters, donors, sponsors, alumni, whoever it may be because this organization has shown me the light that I needed to grow in this industry as a young professional and leader and I’m excited to share that with everyone because the future of agriculture should be exciting and I want to bring that fire back to everyone I connect with this year.”

White is an agronomy major at Murray State University.

Jackson Sylvester, an agriculture major from Delaware, was elected as secretary.

“I’m just so incredibly blessed and excited to get out there, meet these members, inspire them, do different workshops, and really get to know them on a personal level and serve as that influence so many have served me to be,” he says.

He attends the University of Delaware.

“I’m excited to travel the country and meet so many students and engage with a lot of those minorities who might not know that they have a place in FFA,” he says.

He attends the University of Georgia.

“It was moving to see all the FFA members at convention celebrating their identities as the next generation of leaders who will change the world,” he says. I’m excited that we get to bring these people together, hopefully more so than ever in an in-person format when we can and that’s safe. I’m really excited about that.”

Throughout their year of service, the National FFA Officer will interact with business and industry leaders, thousands of FFA members and teachers, corporate sponsors, government and education officials, state FFA leaders, and more. They will also lead personal growth and leadership training conferences for FFA members throughout the country and help set policies that will guide the future of FFA and the next generation of leaders.