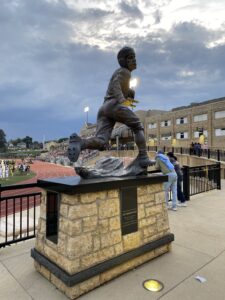 Last week delivered another loss for the Muskies as they made the trip up to Dubuque to take on Hempstead.

With a quick start the Muskies took their first lead of the season with a 41 yard Landon Battey pass to Toyota of Muscatine Player of the game Darnell Thompson. That 7-0 lead was short lived as Hempstead would return the following kickoff for a touchdown to tie things up once again.

After that there was not much to cheer for besides another long touchdown by Thompson late in the second half. The final score was 55-14 and dropped the Muskies to 0-6.

Despite the score, there was vast improvements from the young squad. The offense was able to move the ball well in certain situations and kept themselves out of tough spots. With wet conditions on the field, turnovers were an issue for both teams with a handful of fumbles and interceptions going both ways.

The defense was able to come up with some big stops but with little help from the offense once again, it forced there backs to the wall often. Hempstead has now moved to an even 3-3 on the season.

This week the Muskies will head back to Dalzell Field to take on Dubuque Senior High School who currently sit at 4-2. As the season moves into its back half the Muskies are looking to pull off an upset to finally get a number in that win column.

As the season progresses we have seen vast improvements from the younger guys who are now settling into the speed of the game. Mix this with a playbook that is beginning to open up productivity, and we have potential for an upset.