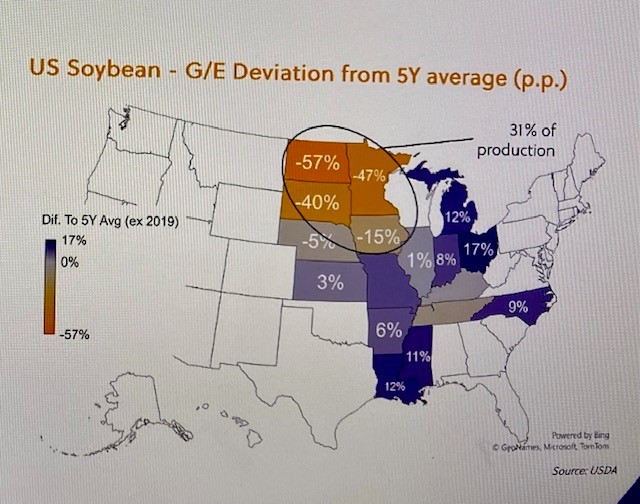 When it comes to the US soybean market, all eyes are on the outcome of fall harvest in the drought-stricken northwest corn belt.

“Any indication that the crop might come in lower than expected, the canary in the coalmine will be that part of the country; the Dakotas, Minnesota and Iowa.”

Chris Trant with hEDGEpoint Global Markets says even farmers with good crops in the eastern corn belt should be watching harvest in those states because those numbers will dictate the market, noting Iowa is the second largest soybean producing state.

“If yields do surprise to the downside in the weeks ahead, that will be a sign the market is currently not prices correctly. But, if yields come in about trend line, odds are that the third largest crop will occur.”

He says their analysts are hopeful for some upcoming rains in Minnesota, Iowa and the Dakotas, but it won’t be enough to save the day.

Trant presented his data and outlooks during an Illinois Soybean Association webinar Tuesday.