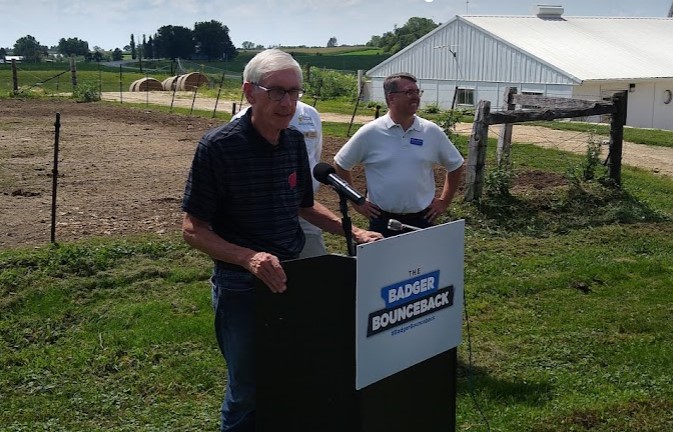 Wisconsin’s Governor says there will be another round of the Wisconsin Farm Support Program providing direct payments to farmers.  Tony Evers stopped at farms near Columbus, Coon Valley, and Menomonie to announce the assistance, which he says will distribute another 50-million dollars through the Department of Revenue later this fall.

Brownfield asked the Governor if there will be payout limits. He said, “It’s too early to tell. After we have a chance to sit down with the Department of Revenue, we’ll have a better idea of that, but it’s going to be similar to last time but I think we learned some things as we went along last time, too.”

Evers says he isn’t ruling out adjusting the signup qualifications and will work with the Department of Revenue and the ag department to open applications soon.

Ag Secretary Designee Randy Romanski says the payments are timely even though 2020 is over and the recovery is underway. “The challenges are there. They’re different than they were before, so it might be inputs. It might be raw materials affecting their operations. It could conceivably be something like inflation, so the challenges for agriculture and farmers remain real.”

The 2020 Farm Support Program funding was provided under the Coronavirus Aid, Relief, and Economic Security (CARES) Act.  The 2021 program is funded by the federal American Rescue Plan Act of 2021.  Evers says farmers that previously received Wisconsin Farm Support Program dollars will be eligible to apply again.

The Governor’s announcement Wednesday was quickly praised by the Dairy Business Association and Wisconsin Farm Bureau.