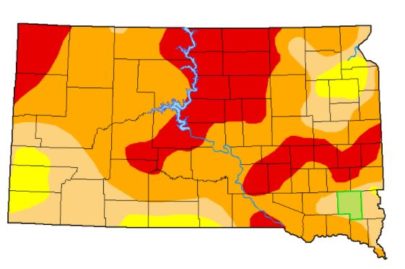 A South Dakota farmer says a lot of hope for his crops has evaporated with the increasing heat and southerly winds.

Trent Kubik, who grows crops and raises cattle in south-central South Dakota (Lyman and Tripp Counties), tells Brownfield the dryness in June had them on alert but they got several rains in July with things looking up until August when the heat ramped up quickly.

“Since Saturday, the last four days and we’re staring at the next two days, we’ve hit 100 (degrees) about every day with about 20 mile an hour south winds. So it’s starting to deteriorate the crop pretty rapidly.”

He expects to harvest about 30 percent of his corn for grain and 70 percent for silage. With feedstocks low, Kubik says that’s been an easier decision to make. Kubik says the best case scenario is they’ll hit their insurance average on corn yield.

As for soybeans, he says they had all the potential in the world in June and July but hope is now fading, “They didn’t get very tall but they put on a lot of flowers and wanting to put on a lot of pods but we’re seeing – it got hot, it got dry – it just aborted a lot of those flowers.”

Kubik says the forecast has a good chance for rain this Thursday and Friday but they’ve seen those kinds of forecasts dry up time and time again. His area is in severe drought with other parts of South Dakota, north and either side of him, in extreme drought.