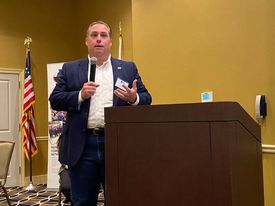 The National Cattleman’s Beef Association is working on a suite of bills to increase and diversify shackle space.

NCBA’s Ethan Lane tells Brownfield they are focused on legislation that incentivizes state-inspected facilities to expand or bump up to federal inspection standards to market across state lines, including the BASIC Act which would provide grants to allow more small, producer-owned facilities and co-ops to expand.  “It’s $100,000 per hook right now to build new hook space in this country,” he says.

Lane says they need to create the resources to make this expansion a reality. “So it’s not just the Big 4 that can expand or contract,” he says.  “But producers on the ground who see a need in their backyard to create some capacity.”

Brownfield spoke with Lane at the Illinois Beef Association meeting in Peoria, IL this week.