Over two inches of rain over several days and occasional sprinkles in between slowed down but did not stop progress for several construction projects in Muscatine this past week.

Surface paving of 18 street and alley segments, part of the 20-21 Asphalt Overlay Project, began May 14 and will continue through June 4.

Work also continued on the Park Avenue 4-to-3 Lane Conversion Project, 2nd Street Streetscape Project, Grandview Avenue Reconstruction Project, and the Full Depth Patching Project despite the rain during the week. Phase 5 of the West Hill Sewer Separation Project has been slowed down as the contractor deals with ground water issues in the work area north of West of 8th Street.

Mother Nature has not been kind to projects in the City of Muscatine including the street and alley asphalt overlay project. Asphalt and water do not work well together but Wednesday's sunshine and drying conditions allowed Manatts to complete the Washington Street section. pic.twitter.com/hpGnbRCEp0

2nd STREET STREETSCAPE PROJECT
Officials from the Department of Public Works announced a full closure of East 2nd Street from Sycamore Street to Iowa Avenue starting Monday (May 24). The 100 block of East 2 nd street has been restricted to one lane of traffic this past week as KE Flatwork began removing and repaving the curb and gutter on the north side of the block.

“On Monday, May 24, KE Flatwork will close 2nd Street between Sycamore Street and Iowa Avenue for continuation of the 2nd Street Streetscape Project,” Brian Stineman, Public Works Director, said. “The road closure is necessary to repair a broken sewer line that was recently discovered.”

The full closure of the block may help speed up the project schedule.

“During this closure KE Flatwork will be able to continue working on sidewalk on both sides of 2nd Street and will hopefully be able to complete work in this block sooner than anticipated,” Stineman said.

The East 2nd Street and Sycamore intersection was reopened to traffic Monday (May 17) afternoon with the 100 block of East 2nd Street closed to westbound traffic but remaining open for eastbound traffic. The removal and replacement of the curb and gutter on the north side of the block is nearly complete. The full closure to repair the sewer line will allow work on the south side to begin along with full depth patching of sections of the driving lanes. 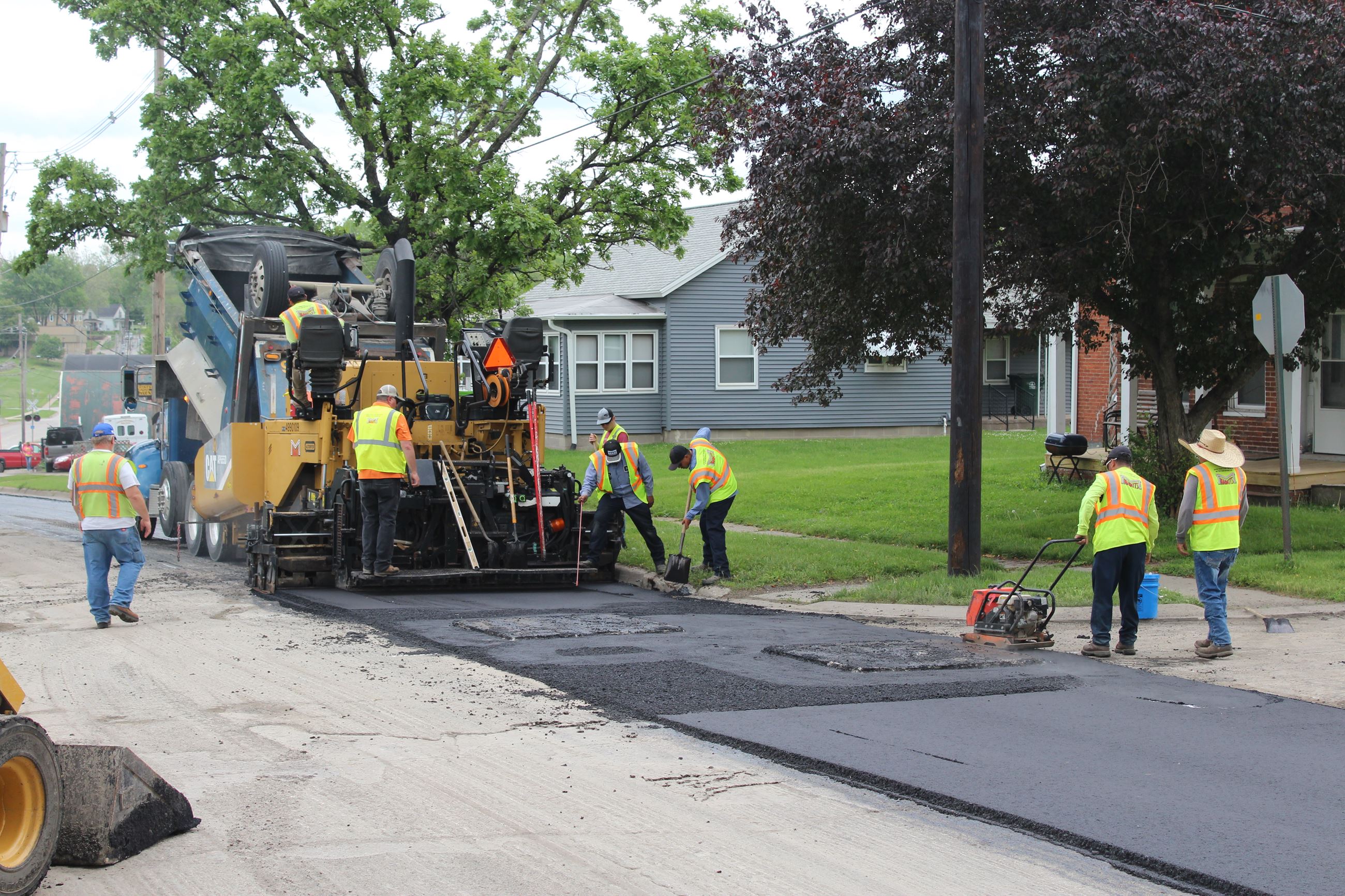 Paving of the nine alley and nine street segments, part of the 2020-2021 Street & Alley Asphalt Overlay Project, began Friday (May 14) with the surfacing of James Place from Parkington Drive to the Dead End along with the surfacing of Alley #1 (Washington to Hawthorne Lane) and Alley #9  (Parkington Drive to Hawthorne Lane) from Orchard Avenue to Park Avenue.

Manatts, the contractor for the asphalt overlay project, started putting down the base layer on Washington Street Thursday from Walters to Cypress but work was stopped there and moved to Houser Street (Cedar to Mulberry) where the base layer was to be applied Friday (May 21) and the surface paving being completed on Saturday (May 22), weather permitting.

Manatts will return to complete Washington Street on Monday (May 24) before resuming the schedule to complete the project. 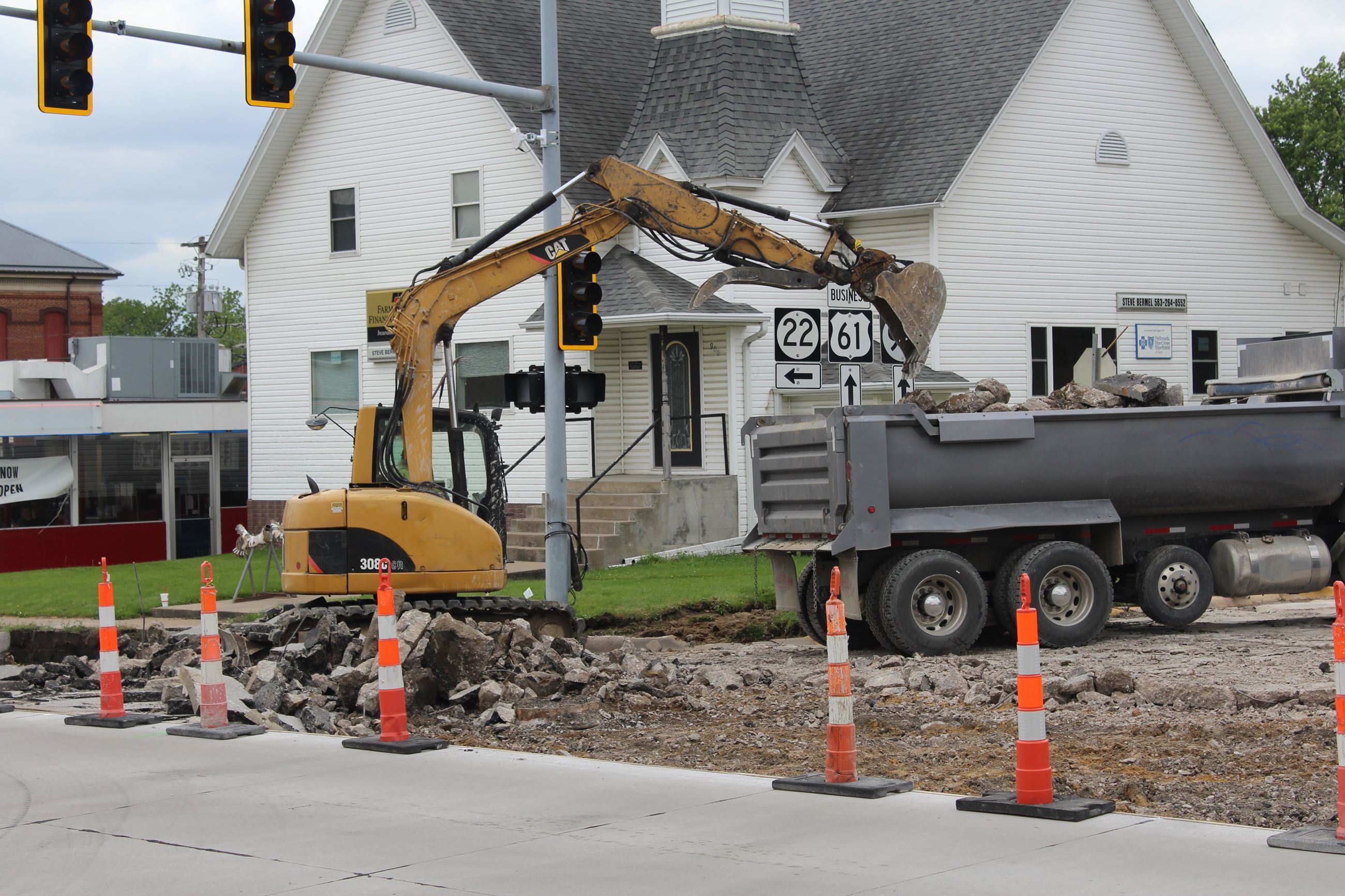 The traffic pattern on Park Avenue changed on May 17 as full depth patching in Stage 2 was completed and the east half of the Washington Street and Park Avenue intersection was opened to traffic.

Two-way Park Avenue traffic is currently restricted to the eastern two lanes for Stage 3 (the east side of Park Avenue from just south of Colorado through the Washington Street intersection).

The removal and replacement of pavement in the west half of the Washington Street and Park Avenue intersection started Monday (May 17). Manatts, the prime contractor for the Park Avenue project, anticipates that work in the intersection will continue through at least May 24, weather permitting.

Details on the intersection closure detours is available at: Closure West Side of Washington Street Intersection (PDF)

The final stage of the project, Stage 3, includes full depth patching and traffic signal replacement in the intersection at Washington and Park Avenue, and full depth patching, curb and gutter removal and replacement, and sidewalk ADA ramps from Washington to Harrison. That work is tentatively scheduled from May 14 to August 13, weather permitting.

Milling of the old asphalt overlay and placement of a new asphalt overlay along with paint stripping from Cypress on East 2nd Street to Harrison on Park Avenue is anticipated to be completed between June 7 and August 13. 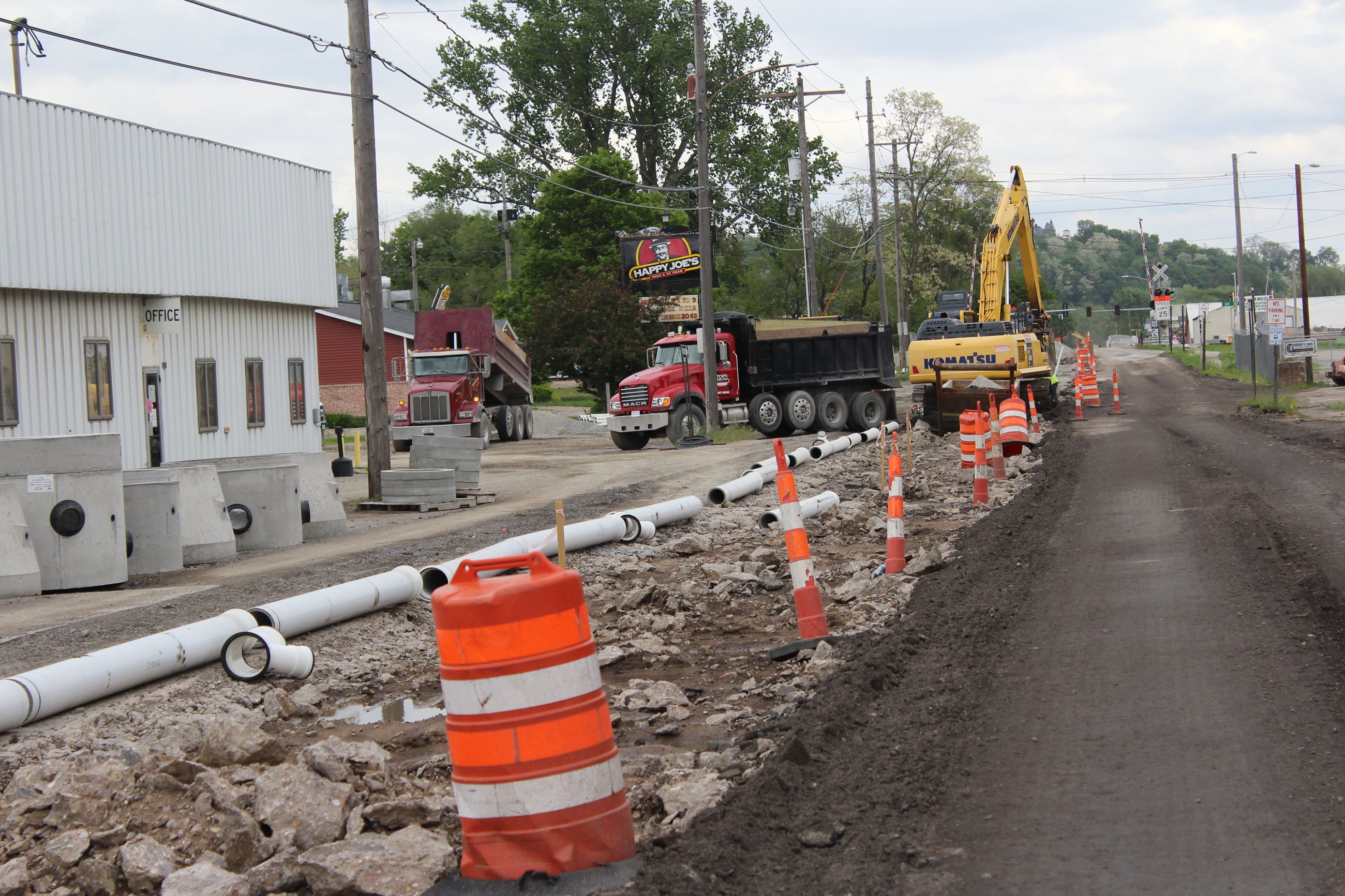 The two-year Grandview Avenue Reconstruction Project is underway with traffic restricted to northbound traffic only from Main to Musser streets. All businesses in the construction area are open and accessible to patrons and customers.

Southbound traffic is detoured to Oregon, Stewart Road, and onto Sampson before returning to Grandview. The intersections of Oregon, Warren, and Musser will be kept open as much as possible.

Heuer Construction, Inc., was awarded the $7.74 million contract for the two-year Grandview Avenue Reconstruction Project that will remove and replace the pavement from Main Street to approximately 200 yards past Houser Street while adding sidewalks and additional streetscaping to provide a much more inviting corridor for residents and visitors.

Additional information on the project can be found on the City of Muscatine web site at Grandview Avenue Revitalization. A project schedule and portions of the updated plan for the corridor will be available soon on this site. 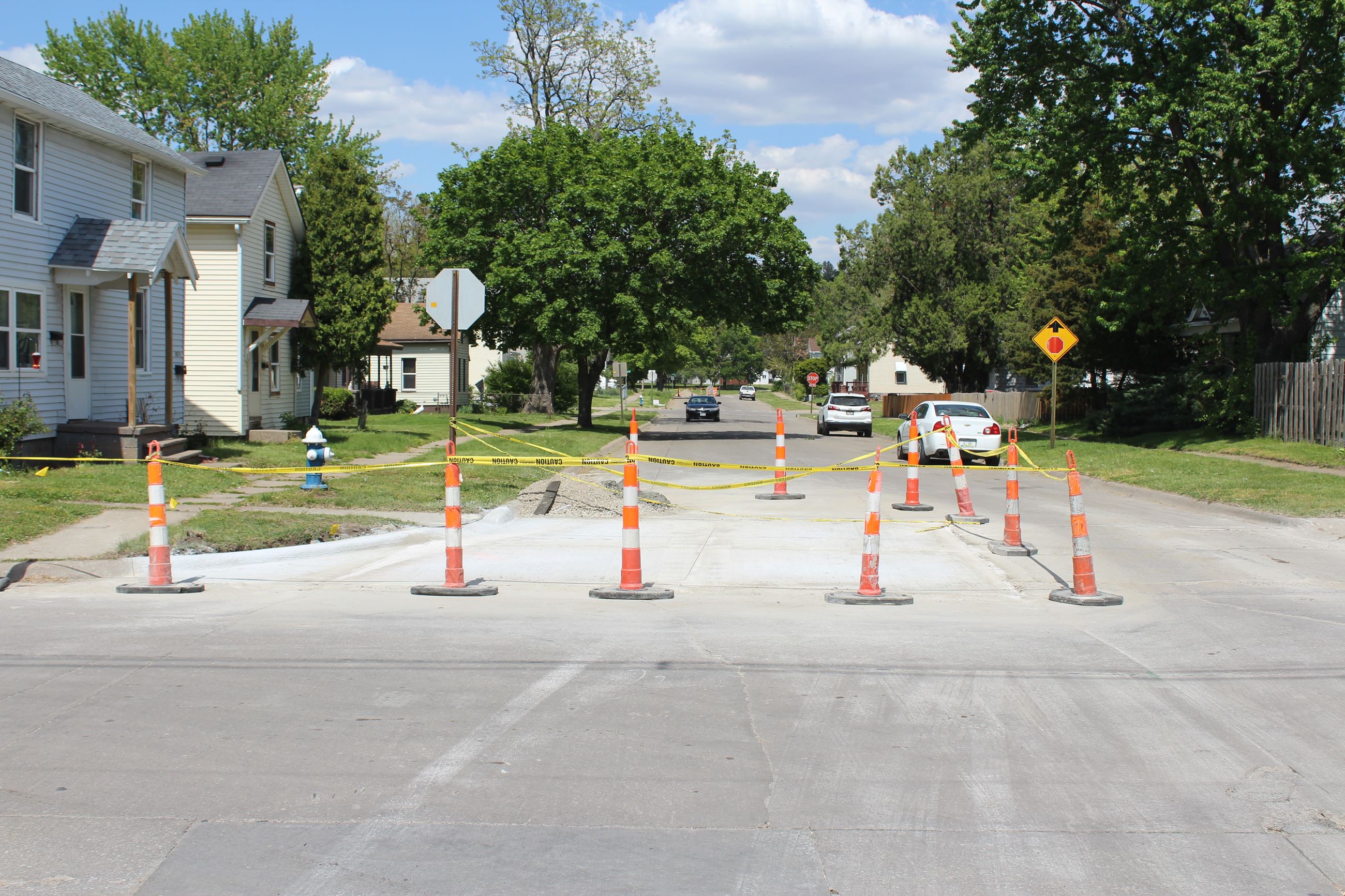 Work continues on two sections on Evans Street, a buckled section near the Reed Street intersection, and the approach to Bond Street as the Full Depth Patching Project, part of the City of Muscatine 2020-2021 Pavement Management Program, continues. Lane restrictions will be in place for the work on Evans Street.

The final segment to be completed as part of the current project is Fulliam from Kindler to Devitt. That work is anticipated to begin next week as soon as the work on Evans has been completed.

All-American Concrete, Inc., was awarded the contract to complete the FY20-21 Full Depth Patching Program and has been working on Ford Avenue and Logan Street. The contract also calls for work on Fulliam Avenue from Kindler to Devitt but that work will not begin until the end of the school year due to the proximity to West Middle School.

WEST HILL PHASE V
Phase V of the West Hill Sanitary and Storm Sewer Separation Project is underway beginning on the property at 891 West 8th and working toward Climer Street. Utility work is tentatively scheduled to move back into West 8th Street on May 24, weather permitting, and continue through July 30.

The recent rains have created a problem for the underground crew with ground water having to be pumped out of the trenches to continue installation of the sewer.

The first year of the two-year project will focus on West 8th Street and Climer Street.

Drivers are reminded to slow down and use caution when travelling through the construction zone, obey traffic control devices, and be aware of workers. Use an alternate route if possible.

For more information on City of Muscatine construction projects click on CONSTRUCTION to visit the Department of Public Works Construction Projects page.