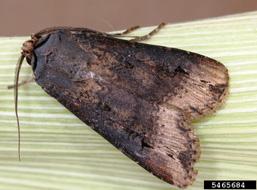 Jensen says the traps are a great early warning tool but not always a good predictor of field damage. “When you’re dealing with adult catches, sometimes, you never quite know what’s going to be happening in the field and that’s why regardless of these blacklight trap catches and pheromone trap catches, spending time in the field is really important right now.”

Jensen says he recommends scouting fields that would be more likely to have problems first. “For example, corn that is planted after soybeans with a lot of soybean stubble is one possibility. Corn that is planted into broadleaf cover crops or have a lot of broadleaf weeds out in them, or low-lying areas of the field.”

Jensen says if there is about 3% damage to plants with young larvae or 5% damage with larger larvae, he would consider spraying but if the cutworms are larger than an inch and a quarter, he would not spray because the worms are almost done feeding and the preventable yield loss doesn’t justify the cost of spraying.