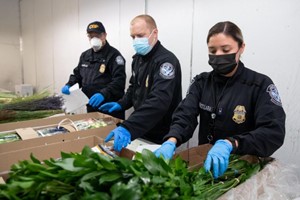 The leader of inspections at the U.S. Customs and Border Protection says Mother’s Day week is one of their busiest for inspecting agriculture-related imports.  John Sagle is the agency’s Acting Executive Director for Agriculture Programs and Trade Liaison.  He tells Brownfield it is because of one primary import product. “CBP agriculture specialists work around the clock to ensure that imported flowers and plants particularly used for Mother’s Day are kept insect-free and that they’re ready for the Mother’s Day market.”

Sagle tells Brownfield the Customs and Border Protection inspectors have screened more than a billion cut flowers and live plants for Mother’s Day alone to prevent the introduction of invasive plants and insects from spreading in the U.S. “Shaking the flowers, we dislodge insects. We use magnifying glasses and other dissection tools to locate pests and diseases on these flowers coming in.”

When inspectors find something, Sable says they work with entomologists and other experts at USDA to help identify problems and solutions, which might mean treatment, re-exporting, or destroying the product.

And the biggest import pest problems? Sable says, “Outlet moths or armyworms, those are our number one. That also includes moths from the Copitarcia genus. Aphids are number two.”

Sable says the flowers for Mother’s Day and Valentine’s Day generally come in by air freight, with most of the shipments going through Miami, New York, Los Angeles, and Dallas. He says on any typical day, CBP agents seize around three thousand plants, meats, animal byproducts, and soils along with about 250 kinds of plant pests.