Censky talks about return to ASA, importance of trade 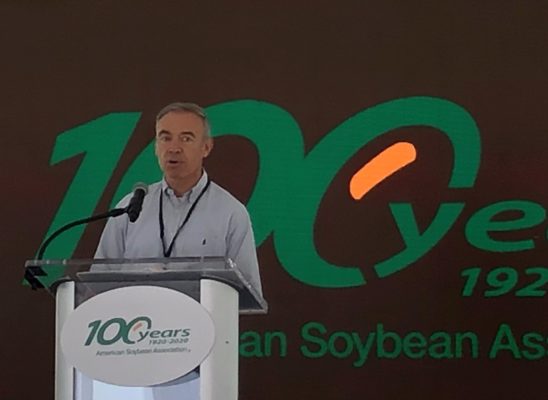 Stephen Censky has returned to the American Soybean Association to resume his duties as CEO.

He worked for the organization for 21 years before he was named US Deputy Secretary of Agriculture in 2017.

Censky tells Brownfield it’s great to be back with ASA.

“I’m thrilled to be back to advance the industry,” he says.

“Keeping trade going is so key to the profitability of soy farmers,” he says. “We want to keep the phase one trade agreement with China going and hopefully move on to a phase two as well,” he says.

He says expanding trade to other areas is critical.

“We would love to see new trade agreements in countries like Vietnam and others and perhaps even have the United States reenter the Trans Pacific Partnership,” he says. “That’s a way to counter China and its growing influence in the region and we think that not only makes good sense for the US overall strategically but it’s also great for soybean farmers.”

Censky says sustainability and climate are also top of mind.

“Trying to make sure we have solutions that work for farmers and ranchers—we do think agriculture is part of the solution,” he says. “We know the Biden administration is going to be focusing on climate change and we want to make sure that those policies make sense and are good for farmers as well.”