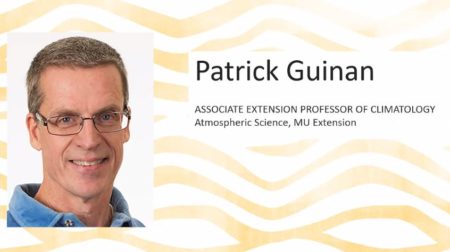 Missouri’s climate has changed. MU climatologist Pat Guinan tells Brownfield Ag News, “If you look over the past few decades what we’re seeing in Missouri, we are definitely trending wetter and we’re trending warmer.”

Guinan says Missouri is in an unprecedented warming and wet pattern – especially in the winter and spring – which means a longer growing season,

“We’re seeing our last spring frost, in general, is running about six days earlier versus the long term. And, on the fall side, if you look over the past 20 years our first fall freeze is occurring about five days later.”

But, he says, farmers face wetter conditions at planting and harvest and the potential for plant disease and insects has increased as a result.

He points out Missouri weather can change quickly – as shown by the drought in 2012 – and the state’s farmers have learned to adapt.