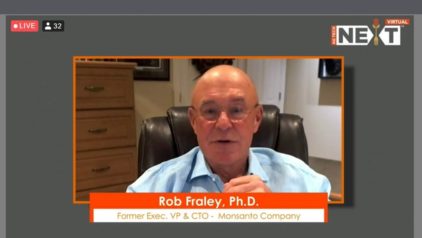 One of the scientists behind the development of genetically modified crops says there’s room for plant-based proteins to meet the evolving consumer interest and future demand. Robb Fraley, former chief technology officer of Monsanto, says the development of the Impossible Burger, is ‘a very cool’ example, “Based proudly on GMO technology to develop the heme based proteins and mass production in yeast or microbial systems. Blend that together to create the Impossible Burger. That is incredible science and innovation.”

Fraley says there is room for plant-based proteins among the ever-growing demand for animal proteins, “It’s very compatible and very much a part of the complementary and diverse strength of our agriculture and food production system.”

Fraley says the overall demand for meat production continues to increase to meet the nutrition and dietary needs of people around the world and there are exciting new digital tools and the promise of gene editing to advance animal agriculture.

Fraley spoke on the Ag Tech Next series hosted by the Danforth Plant Science Center in St. Louis.