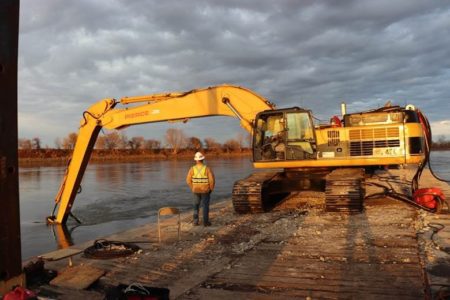 Emergency repairs are underway on the Missouri River navigation system where receding flood waters have revealed a lot of damage to navigation structures.

Colonel Bill Hannan, commander of the Kansas City Corps of Engineers District, tells Brownfield Ag News more than five-thousand damaged structures have been revealed, “We had about 21 significant areas where the channel was less than nine feet. So that happened about two months ago and since then we’ve been working really hard with the resources that we have to do emergency fixes at these locations.”

Hannan says barges have been grounded and tug boats damaged, having a big effect on navigation – mostly between Kansas City and St. Louis, “Barges have had to go with less fill. They’ve had to go with less number of barges,” But, he says with the help of numerous crews – including the Omaha District, and the Rock Island district along the Mississippi River – they’ve been able to get shipments through.

After December first, Hannan says they will do a full estimate of all the damages but he knows they will come up short on funding.