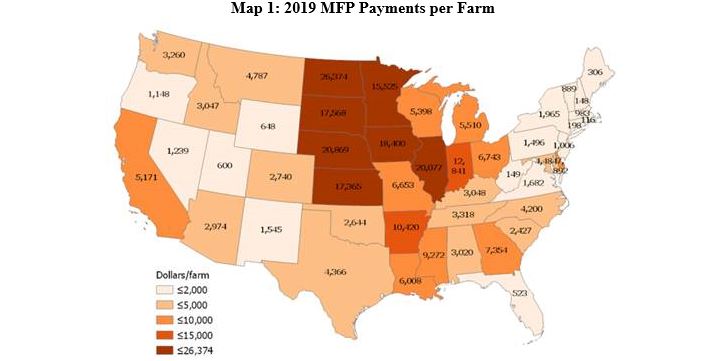 The USDA is countering claims made by Democrats who say the Government Accountability Office report proves the distribution of Margin Protection Program payments has been unfair.

“And Georgia leads the nation with an average payment of $42,000 plus per farmer, which is more than double the national payment.”

A spokesperson for USDA tells Brownfield payment rates were based on trade damage, not by region or farm size, with more than 650,000 farmers receiving payments under the 2019 program.  They say to date, the Midwest region has received nearly 70 percent of the funds and, the top five recipient states are Iowa, Illinois, Minnesota, Texas, and Kansas.

Stabenow says that’s true because there are more individual farmers in the Midwest, but profitability comes down to the acre, and per farmer, per acre, Southern farmers hit the jackpot.  She says Ag Secretary Sonny Perdue, who’s home state is Georgia, certainly put together a program that favored the crops in his state. “If it were me, I would find that very uncomfortable.”

The USDA says cotton and sorghum received higher payments in 2018 because they had significantly higher trade damages per unit of production compared to other commodities but in 2019, rates for those and other row crops were set at a single county rate to avoid distortions.

The USDA tells Brownfield large farmers account for 10 percent of all farms, but operate on more than half of total farmland and generate nearly 80 percent of the total value of production which is why trade impacts for those farmers was relatively greater, and they received higher total payments than smaller farms. The agency says farms with less than 100 acres actually received $10 per acre more than farms with more than 2,500 acres.

House Agriculture committee member Marcia Fudge of Ohio is also calling out the USDA, saying the disparities have been made worse by the Administration’s lack of transparency and inability to work with Congress.