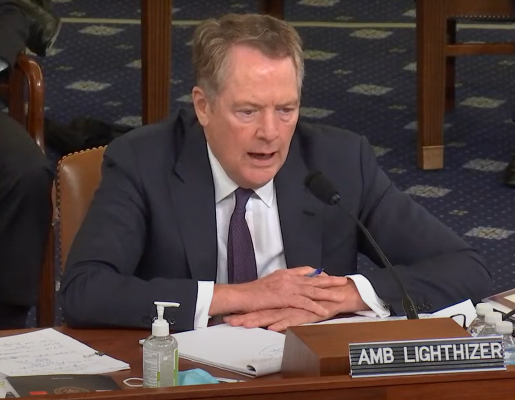 In his testimony, Lighthizer discussed efforts to eliminate non-scientific trade barriers imposed on U.S. ag and food products by other countries. He was especially critical of the European Union’s claims that some U.S. food and ag products are unsafe, calling it “thinly-veiled protectionism”.

His comments were challenged by Blumenauer, who argued that the U.S. food production system has many flaws. He mentioned food safety and environmental concerns and cited as examples recent issues with meat processing facilities and crop farmers’ dependence on pesticides.

“Should we really export our weak standards to another country who has legitimate public policy concerns and may provide better protection,” Blumenauer said. “I think too often we hide behind requiring science-based justification for other nations—sanitary and phytosanitary—without allowing flexibility on values and public input.”

Lighthizer responded that while ag policy is not his area of expertise, “I would say the United States has the best agriculture in the world. It has the safest, highest standards and I think we shouldn’t confuse science with consumer preference. If consumers have a preference for one thing or another, they should certainly exercise their preference.

Here is an excerpt of the exchange between Blumenauer and Lighthizer.