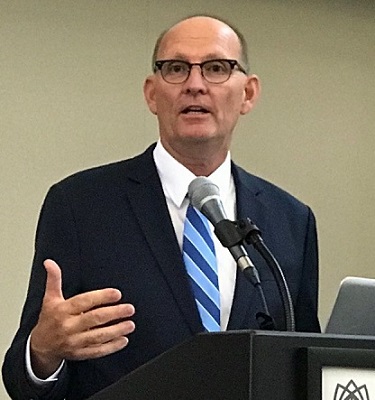 Ibach, who is a cattle rancher from Nebraska, tells Brownfield he is also concerned about price discovery in the industry.

“From not only a producer point of view, but in my job at USDA, what is really key is how often are we not able to report prices on what the negotiated price for animals is,” Ibach says. “There are some regions of the United States where it’s not uncommon for us to not be able to post prices and protect confidentiality in the marketplace.”

Ibach expects it to be an issue as Congress discusses the reauthorization of mandatory price reporting later this year.

“That’s something that I think Congress is looking at and have already asked us questions about at USDA,” he says.

Some cattle organizations say the current percentage of negotiated cash trade, which runs around 20 percent nationwide, needs to be closer to 50 percent.

Ibach, who oversees marketing and regulatory programs at USDA, spoke with Brownfield Thursday following his appearance at Nebraska Governor Pete Ricketts’ news conference in Lincoln.  He also discussed the status of USDA’s investigation into the beef packing sector and concerns about cattle and beef pricing.