Pence says food supply is ‘a great success story’; Duvall reminds him it starts with farmers 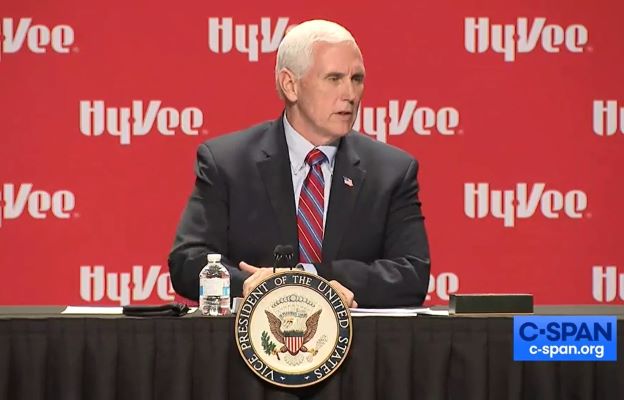 Vice President Mike Pence, during an appearance in Des Moines Friday, said as America has struggled with the COVID-19 pandemic, the food supply chain is one of “great success stories”.

“From the first day that the coronavirus emerged in the United States, up until this very day, the food supply in America has remained strong,” Pence said.

Pence met with leaders of the agriculture, meat processing and grocery industries. Among them was American Farm Bureau president Zippy Duvall, who reminded Pence that farmers are the very first link in that chain.

“Without the millions of farmers out there doing what they do, each and every day, there’s nothing to process. There’s no chain to carry it on,” Duvall said.

With top officials of meat packers Tyson and Smithfield seated nearby, Duvall also raised the issue of price fixing in the beef industry. He said farmers are frustrated by the “rock bottom” prices for live cattle and the “sky high” wholesale prices for beef carcasses.

“The farmers and ranchers are coming unhinged when they see that difference in that price because they’re facing losing their farms,” he said, “and it is a very difficult thing to explain.”

Iowa Senator Chuck Grassley, who was also on hand, told the meat packers that farmers want an explanation.

“How come we’re losing hundreds of dollars on our cattle and the prices (for) consumers are going up?” Grassley said.

Radio Iowa contributed to this story.