A Corn Belt cool-off; rain on the southern Plains

Across the Corn Belt, cooler air is arriving on gusty winds, following a cold front’s passage. Tuesday morning’s low temperatures fell to 25º or below in parts of the far upper Midwest. Currently, a few rain and snow showers linger in the vicinity of the Great Lakes. Planting remains sluggish in many areas, in part due to the ongoing cool spell; Missouri led the Midwest with 11% of its intended corn acreage planted on April 19, compared to the 5-year average of 25%.

On the Plains, cold weather is mostly limited to the eastern Dakotas. For the second consecutive year, no sugarbeets or spring wheat were planted in North Dakota by April 19; respective 5-year averages are 21 and 9%. Across the remainder of the nation’s mid-section, mild, mostly dry weather favors spring fieldwork. Winter wheat producers on the central and southern Plains continue to monitor winter wheat for signs of freeze injury, following last week’s cold wave.

In the South, most of the region lies between weather systems and is experiencing mild, dry weather. A few thunderstorms from a departing storm system linger across southern Florida, while scattered showers from an approaching cold front are overspreading the southern Appalachians. However, some fields remain wet in the wake of recent heavy rain; on April 19, topsoil moisture was rated 56% surplus in Arkansas. 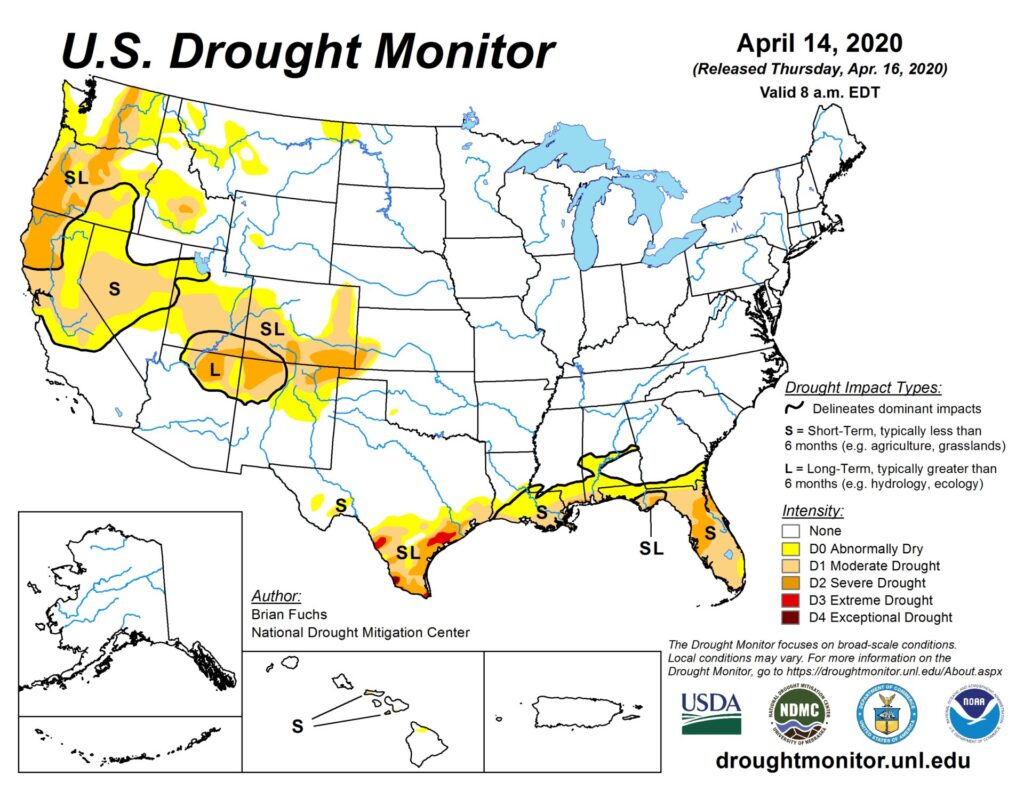 In the West, some light precipitation is arriving across an area stretching from southern California to the Four Corners region in conjunction with a developing storm system. Meanwhile, a warm dry weather pattern continues in the Northwest, where Washington led the nation (among major production states) on April 19 with 78% of its spring wheat planted.