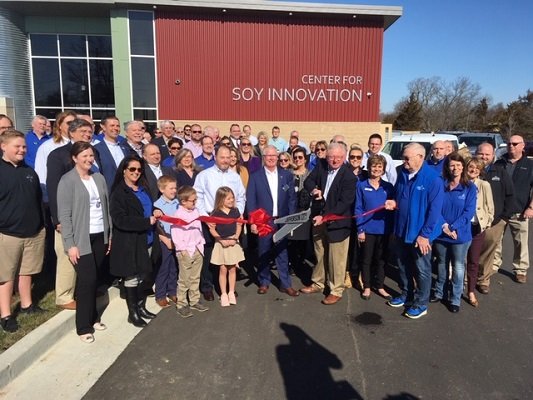 Governor Mike Parson spoke at the opening, telling Brownfield afterward that the center not only showcases soybeans and builds that brand, it serves as a center for teaching.

“It’s going to be a great opportunity for people to learn about how important agriculture is, how important the soybean industry is,” Governor Parson told Brownfield Ag News. “What I look at is for the kids that are going to come here just to understand what agriculture means to the state of Missouri and how important it is.”

“It’s really neat to see a tribute as big as this building to something as small as a soybean,” said Missouri Soybean Association Board member Garrett Riekhof, who farms at Higginsville and was one of many farmers in Jefferson City for the grand opening.

“It’s more important now going forward than ever that we educate the general public about agriculture and soybeans in particular,” commented soybean grower Neal Bredehoeft, Alma, Missouri, a director on the United Soybean Board. “This building really fits that model.”

The aim of the building design, according to Missouri Soybean staff, is to show through interactive displays what soybeans are the how they’re used. “What visitors will see when they go inside is the evolution of the soybean and the technology,” said Chris Chinn, director of the Missouri Department of Agriculture. “People don’t know how versatile that soybean is and how important it is to the everyday life of every Missourian and every American.”