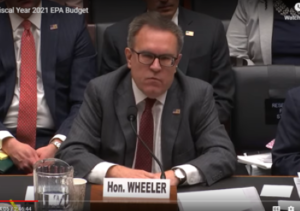 The head of the EPA blames the recent 10th Circuit Court ruling on small refinery exemptions for a spike in RIN prices.

Stewart asked if the EPA planned to appeal. Wheeler says the agency is still working on that with their own attorneys as well as attorneys at the Department of Justice.

“A decision has to be made by next week so we will be announcing something shortly.”

In late January, the U.S. Court of Appeals for the 10th Circuit struck down three exemptions that were issued by the EPA.  Administrator Wheeler has said the ruling has the potential to completely change the SRE program.