Pence promises to stand with farmers 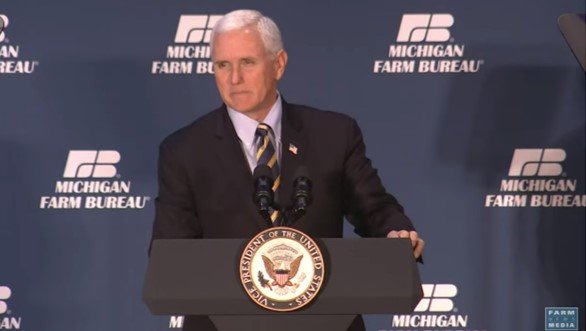 Vice President Mike Pence reaffirmed the Trump administration’s support for farmers as part of a bus tour through Michigan Tuesday.

“We’re going to stand with you no matter what political philosophies or political winds are blowing. President Donald Trump, this Vice President, this administration will always stand with the American farmer.  I promise.”

“Mentioning that ‘We’re not done yet, there are a lot more agreements that need to be done and we’re going to move agriculture forward in more trade agreements.’”

Bednarski says he was able to bring up trade issues specialty crops as well as labor one-on-one with Pence.

“When we take a look at cherries, asparagus, blueberries, apples—those products are really being hit hard right now.”

Pence reflected on his time growing up in rural Indiana and expressed his appreciation for agriculture, even mentioning wearing an FFA tie for the event.

“I’m always in awe when I visit farmers and see the extraordinary range of information that you take.  You’re small business owners and yet you’re out there with your sleeves rolled up getting the work done.”

U.S. Ag Secretary Sonny Perdue also attended the Lansing Legislative Seminar to introduce Pence but had no new information from USDA or the administration regarding agriculture.

This was the first time cabinet-level officials attended the event.