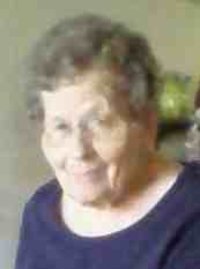 Annabelle Jarvis, 90, of Colonial Manor in Columbus Junction died Saturday September 21, 2019.  Funeral Services will be 10:30 a.m. on Monday, September 30, 2019 at the Dudgeon-McCulley Funeral Home.  Burial will be in Parsons Cemetery.  Visitation will be from 4:00 p.m. until 7:00 p.m. on Sunday, September 29, 2019 at the funeral home.  A memorial has been established for the Alzheimer’s Association in Annabelle’s name.    Condolences may be given and viewed at www.dudgeonmcculley.com.

Annabelle Ratel was born on September 19, 1929 in Trenton, Missouri the daughter of Frank and Mary Ellen (Sherman) Ratel.  On October 24, 1949 Annabelle was united in marriage to Max Merritt Jarvis in Muscatine.  Annabelle was a homemaker and a member of the First Baptist Church of Muscatine.  She enjoyed painting, drawing, her cats and especially time she spent with her family and friends.

She was preceded in death by her parents; husband; daughter, Carla Hargraffen and siblings.